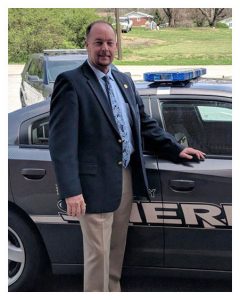 Robert Holland is currently serving his fourth term as Macon County Sheriff, having been elected in 2002 following the retirement of Sheriff Homer Holbrooks. He has served honorably as a law enforcement officer for 27 years. He began his career with the Macon County Sheriff’s Office in 1991. He worked his way up through the ranks of the department, serving as Detention Officer, Deputy Sheriff, Juvenile Investigator, K-9 Handler, and Detective Sergeant. He has always had a heart geared toward helping our most valuable resource, our children. He was the recipient of the NC Juvenile Officer of the Year in 1999 and he and his wife received the Donna B. Stone Memorial Award by Prevent Child Abuse NC for their efforts in working with victims of child abuse and for efforts in getting the NC Infant Homicide Prevention Act signed into law in July 2000.

Since being elected as Macon County Sheriff, Robby has received numerous awards and accolades for both his proactive approach to law enforcement and for his effectiveness in fighting crime: 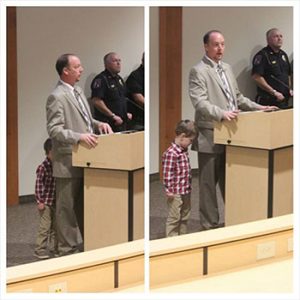 Robby and his wife, Marci, have been married for 25 years and have two children, a daughter and a son, ages 12 and 8. The Hollands are members of Pine Grove Baptist Church where they have both attended since childhood.  Robby is among the 6th generation of Hollands to call Macon County home.  He is the son of the late Arvil Holland and the late Terry Holland Attwood, and the grandson of the late Lester and Donnie Holland.  Robby and his wife Marci both have deep roots in Macon County and Robby is committed to keeping the community he loves a great and safe place to live.